“We are. There were and WE will be!”, about the members of the UCU Business School Community in the ranks of the Armed Forces of Ukraine

For 147+ days, Ukrainians have shown incredible strength and courage in resisting the Russian invader. Everyone is fighting on their own front, some on the volunteer front, some on the informational, economic or educational front. But there are those who heroically stand for Ukraine every day at the front lines, defend our dream, freedom and the future of the younger generation.

These Heroes are actually very close, they are our relatives, friends, classmates, or employees. Of course, they are also among the Community of the UCU Business School – participants or graduates of master’s programs, who are just now courageously defending Ukraine in the ranks of the Armed Forces of Ukraine and Teroborona. Each of our soldiers deserves special attention and respect, so we want to tell you a little more about them. 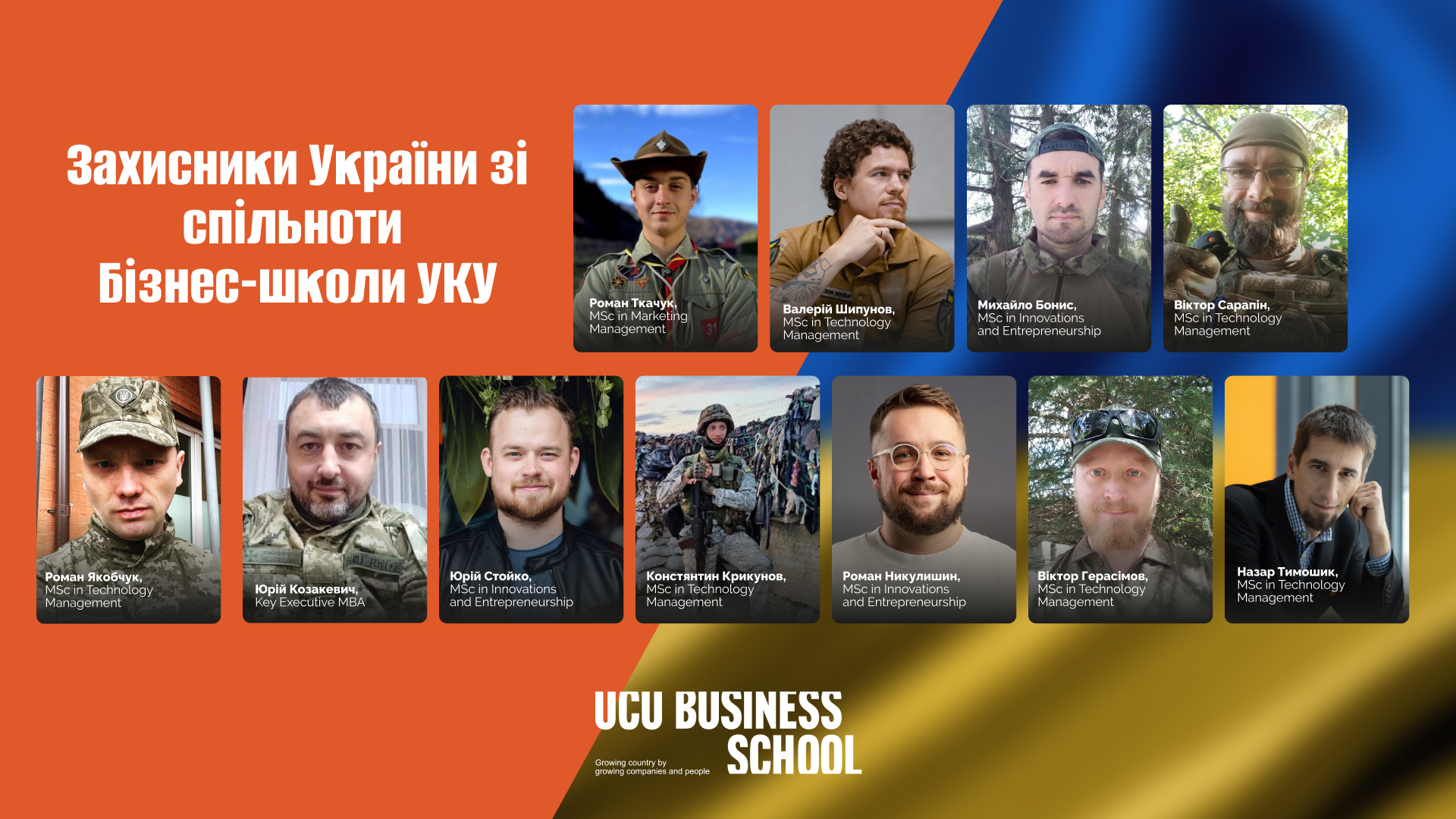 “If anything has become clear to me during these months here, it is how important the Community is, the values ​​and knowledge you and I acquired within the walls of the Ukrainian Catholic University. Outside this ‘bubble’ everything is completely different: there is a huge field for change! Let’s work on this together,” – Roman Yakobchuk, a participant in the MSc in Technology Management program of the UCU Business School, shared with us from the Donetsk front.

“No matter where I am, no matter who I meet, I hear one thing – “We will not give up, we will fight to the end, to victory! To the victory of God’s truth”. Because we are talking about what God has determined –  human dignity, human freedom, the right to live freely, not as slaves – Ukraine will never be a slave of russia. No one can force us into a colonial system, this is why the younger generation of Ukrainians are risking their lives,” – Archbishop-Metropolitan of Philadelphia Borys Gudziak, president of UCU, recently addressed this year’s 2022 graduates.

It is especially valuable now to read their army diaries on social networks:

“We are. There were and we will be! And our Motherland is with us. These are words of Ivan Bagryany, a favorite writer from childhood, the author of Tiger Catchers, who was born in Okhtyrka. The victory will be ours,” – Yuriy Kozakevych, a graduate of the Key Executive MBA program, writes on his Facebook page from the city of Okhtyrka.

“… Alpine barbel is a red book beetle. Our entire country is now in the red book. The time is like this. That is why we hold our position in the forest together. We will break through,” writes Yuriy.

“We are already here. We are building, entrenching, guarding, preparing to convey our ‘sincere greetings’ to the orcs from western Ukraine,” writes Kostiantyn Krykunov, a graduate of the MSc in Technology Management, Strategic Clients Advisory program at the SoftServe company.

In general, among the members of our Community now at the front are:

Unfortunately, for obvious reasons, not all of our defenders can share the important tasks they are currently performing for our common victory and tell us the details. But we believe in the Armed Forces of Ukraine and our victory, so we are definitely waiting for a live meeting afterwards!

“The whole world looks at Ukrainians, imagining our defenders on the front lines as real heroes. Be BRAVE can be seen in the subway in New York, on the streets of Berlin, blue and yellow flags filled the streets and squares of all Scandinavian countries, and little Lithuania showed an example of crowdfunding for bairaktars. All this was an expression of solidarity. After all, it is difficult for any civilized person to imagine all the horrors that Ukrainians are currently experiencing every day as a result of terror from the russian side.

Many admit that they do not know if they would be able to defend their country in this way. And our guys do their work very modestly and quietly. We learned about the participation of some of them in the Armed Forces of Ukraine or the Territorial Defense in the 3rd or even 4th month of the war. Apparently, we don’t know about all of them yet. But we would really like to find out, because it is so important for the UCU Business School to maintain a network. We hope that we, as our community, can support you in one way or another,” shared Sofia Opatska, founding dean of the UCU Business School, vice-rector for strategic development of the Ukrainian Catholic University.

Thank you to every defender for a safe sky! Every defender of Ukraine today deserves special thanks and prayers. We know that victory is behind us. We are praying for you and look forward to seeing you at UCU.