On emerging technologies, digital trends, work in IBM and being Catholic deacon

We spoke with Stephen Russo, Global Director for Cognitive City solutions at IBM and lecturer at LvBS. Stephen has a wealth of experience in the management of complicated projects that include IoT, artificial intelligence, security, along with other technologies. He also is a visionary who cares strongly about the ethical outcomes of the emerging technologies. It’s no surprise for us either that for many years Stephen ministered as a deacon at the Greek-Catholic Church. 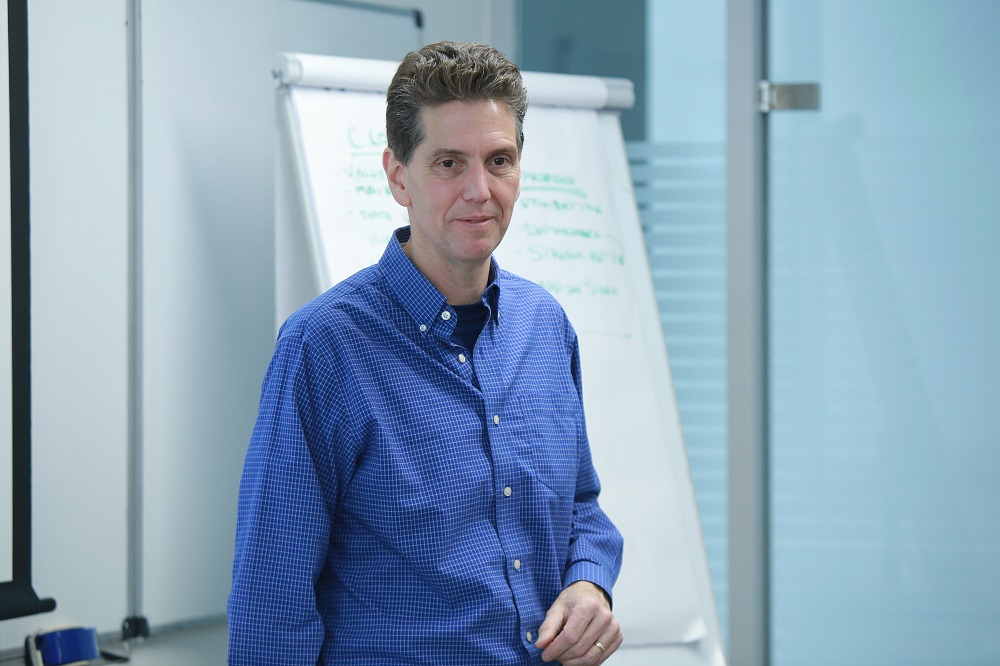 Let`s start with the question about your domain expertise – Smart City Technologies. We are aware that technologies will make our lives more comfortable, but of course, there are some probable risks that technologies can provoke, especially on the city level. Do you believe that technology can help in managing large city systems (finance, transport, electricity)?

In technology, there is always a sort of backup plan. Even in law enforcement and public safety, the systems are still designed so that an alternative can come into play. It is intended to make life easier; you have a better view of command control, how you operate and respond to an accident or, let’s say if there is a failure in water pipes or something similar. But if the technology goes down, we encourage our clients to do two things: one, if there is enough budget, they can have an alternative centre, so that we have what they call “high availability”, to make sure that it is always readily available.

Option 2 is that you have alternate means. Police forces in most cities use radio communications. Radio communication is a somewhat primitive option, but it has proven to be the most reliable. Even in bad situations where you have power loss or when networks go down, radio communication can still operate, that’s why we continue to see police forces and other organizations use it. The system has to be not just one critical entity, and if it goes down, everything fails. Ir is undeniably dangerous.  But if you can have multiple points, you’ll have backup and recovery; you will also have alternate means to reduce the risks.

Some people believe that new technologies and new models can make things more secure. For example, not a long time ago, many specialists regarded the Blockchain as a way out. Can such technologies be one of these tools, or is it mostly hype?

It can be. Like many technologies, Blockchain is relatively new, the process of the technology is unique, it hasn’t proven itself as of yet. It doesn’t mean that it can’t be very practical or critical, but when technology is new, there is a possibility of false positives that can occur. There is also the uncertainty of performance issues and other related problems.  In my opinion, it has not stabilized to be used in a critical situation. I also feel that it will eventually get there. The concept and the ideas behind Blockchain are outstanding, but real production implementation that is widely used today isn’t quite there yet.  I find it even with video surveillance and vision analytics: a few years back, it was not possible to implement what we have right now. Now that things have significantly improved. It can be used in production like fashion, so with Blockchain and any new technology, it is essential to understand the reality and the hype behind it.

Many companies want to sell and sell more, and sometimes the hype is much bolder than the actual technology. It can be dangerous, even for businesses because when you sell something that is not developed, and customers have spent money to see that it doesn’t perform a valuable function, they are timid about adopting new technologies on offer. 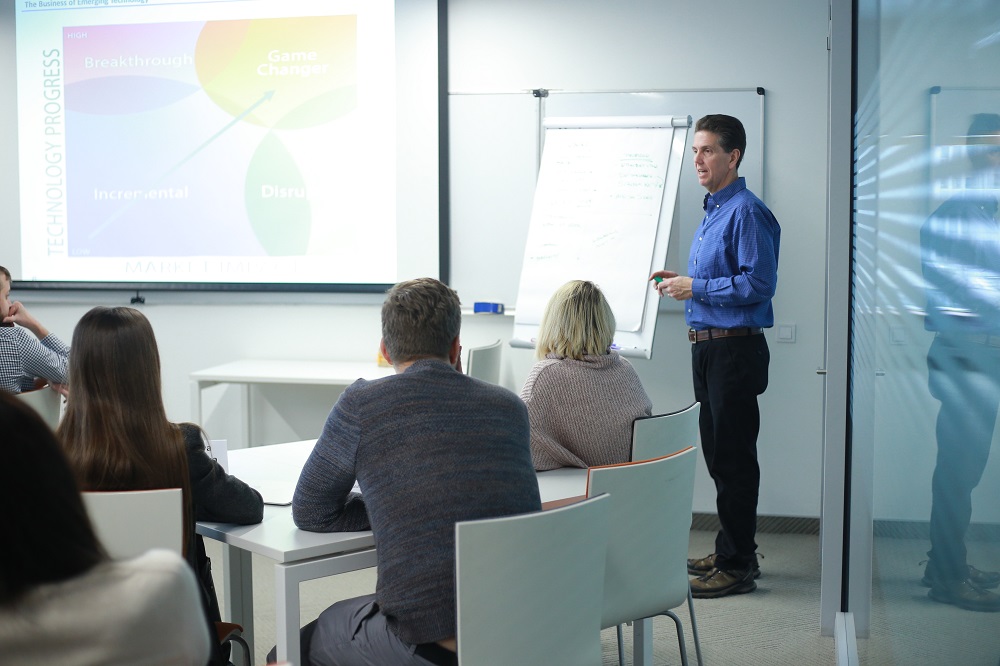 At the meeting with our master students, you mentioned that IBM sometimes could stop their research and development if it seems to be threatening. How can we measure the threats or the risks? Do you believe that other companies and scientists could stop if there were some risks or threats that could impact humanity?

There are numerous ways to look at this question. If we develop technology, and it has the potential of being misused, we will try to stop that usage. For example, while we have surveillance technology mainly designed for public safety and to provide more efficiency, it can be used by various government regimes to spy on people and to track individuals. We have made decisions – do we want to sell that technology to specific entities or governments that we feel may inappropriately use them? Of course, no.

Let’s take another view – if we look at some states: gun control in the US. I happen to live near the place where the situation occurred in Sandy Hook town, Connecticut. Many school children were killed.  The government worked on putting gun controls for these types of guns in place. But it wasn’t the guns that were the problem. The problem was actually to do with a person who had severe mental health conditions. At the same time, the government cut funding for mental health.  So what was the root of the problem? The above is an extreme example, but if I look at technology in the same way: technology can be used properly. When one sees that there is an intention to misuse it, we sometimes make decisions to stop development or not to sell in certain areas. We restrict sales to some degree. There is a certain amount of integrity around this. Now, can we be 100% sure? Unfortunately, no. It is why we see cybercrime; it is using inherently good tech for immoral purposes.

Could you predict, analyze or share what specific technologies do you regard as possessing the most potential for development along with gaining some value in the next 5 years?

Well, I don’t know if I can predict that because if I could predict what would be going on in the next five years, I could probably predict the stock market and be sunning myself on an island after making such a valuable prediction. Still, if I look at what we see today, blockchain has tremendous potential, which right now is only just scratching the surface, but we don’t quite know how to use it now – that’s one area. Secondly – I would say, in an area of vision computing along with being able to understand the world that surrounds us more accurately.  It is something that has been around for quite some time – maybe 20+ years. But now it is really starting to be effective, and we can use it clearly and also show its value. Artificial intelligence and cognitive computing is probably the third area. Still, in all three of them like any technology, it has to be defined in a way that is simple enough to decipher. Solving a problem or making people’s lives better can be affordable, as it is with most technologies, even if we think of PC: when the first PC came out, it’s cost was around $10,000, very few people could afford it. 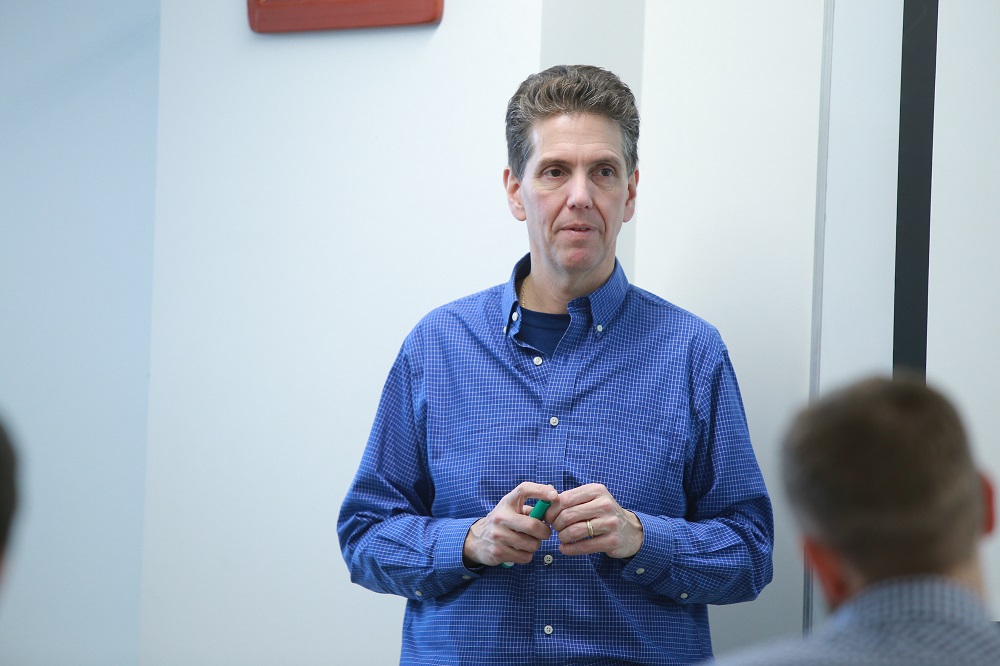 Now I would like to return to our conversation about your vocation, you are a deacon of The Eastern Catholic Church and it’s interesting how you combine your career in IT with it. Do you find this difficult or easy?

It can be challenging some of the time because one thing I do have to say – IBM has been a traditionally high-integrity company. Hence, as for a Catholic and as for a deacon, there are some high moral standards and beliefs. We also believe in fairness and how we treat others. Some companies do not stick to that, in the case of IBM, they do it very much more not for religious or spiritual reasons, but economic one so that their customers can trust them.

From that aspect, it allows me to work, be fair and honest, and we do have strict rules. In certain countries where bribery can be part of everyday business, we do not do business. The area that I find to be difficult are large companies because they want to be relevant to all types of people; they feel that you are diverse and primarily due to the religious aspect.

Our beliefs and background are geared around everything that we do and all the decisions that we make. It doesn’t mean that we treat people favourably regardless of their religious affiliations or other habits, but also the companies can’t enforce things that are required, that would compromise our integrity and our beliefs. It is where the freedom of religion is, and we find this out it when we see it in companies, even in governments where there is a fine line that must not be crossed.

Do you suppose we can reach a point where faith and science can meet and come to some mutual understanding? And what is a role of technology in it?

Faith and science come together – yes, I do believe they are coming closer, and the more we learn, the closer we can get. That’s one of my reasons why humans with such a limited lifespan do want to learn more. The likelihood of earthly human physical immortality is not going to happen quickly, so why do you do it?  Because we have a desire to learn more and bring more faith closer to our fact of understanding. The other piece of the question – technology merging with faith – I don’t see it.  I can look at how technology can help. We have technology that is assisting in parts of the human body with joint replacement, with artificial hearts and pacemakers, I see where it can be supporting, but will it take over at some point and learn on its own? – I don’t see that in the foreseeable future. Could it eventually happen? – I don’t believe that, but exploring will take a lot more to say how to come together, in a way we see things progressing and it is always bound to fail in many ways, even though we can assist – I don’t think it will ever take over.