Virtuous leadership: validation of the Canadian model in Ukraine

Aristotle once wrote, «Principatum virum ostendit» which translates to «Leadership proves
the man» (or the women, we may add). Given that leadership tests a person, it was, and
remains, of paramount importance for philosophers to understand which traits leaders
should posses. For example, Aristotle mentioned the importance of courage, justice and
temperance. Later, during the Age of Enlightenment, Charles-Louis Montesquieu wrote
about which virtues people from different social groups should posses. For example,
Montesquieu emphasized that good judgement was a crucial virtue for the rulers of states.
If matters of virtue and character were vital to eminent thinkers across the ages, why is
there a tendency to neglect their role in the formation of contemporary leaders? Have such
concepts really become less important in modern society?

Research conducted by Mary Crossan, Gerard Seijts and Jeffrey Gandz, founding members of the Ian Ihnatowycz Institute for Leadership of the Ivey Business School (Canada), revealed the answer to be «no». Character matters, and it is decisive to ensure leadership that is not only good but also effective. These scholars sought to answer a question as to why the economic crisis of 2008-2009 occurred. As a result of their inquiry, they identified three kinds of leadership failures that led to the crisis: failure of competences, commitment, and character. Crossan, Seijts and Gandz concluded that whereas competencies reflect what person can do and commitment describes the degree of effort that someone will put into doing those things, it is character what ultimately influences a leader’s decision-making process. 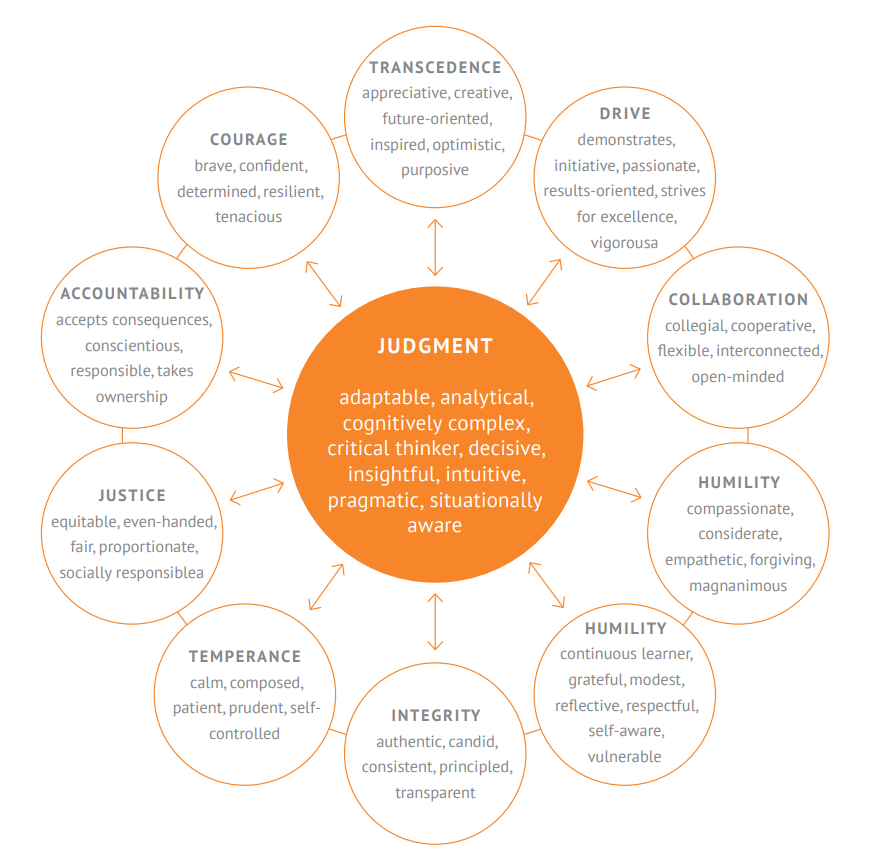 In order to understand in greater depth the nature of «leader character», the researchers at the
Ian O. Ihnatowycz of Leadership joined forces with SIGMA Assessment Systems Inc, to develop and test the Leader Character Insights and Assessment survey (LCIA-360). They then used this as a tool to learn from the responses of more than 2000 leaders representing both the public and private sectors. The insights of this work revealed that leader character can be measured using 61 items, which conform to eleven character dimensions (see figure 1). These 11 dimensions describe the virtues, values and traits that are the hallmark of a good and effective leader.

In collaboration with the Ian O. Ihnatowycz Center for Leadership, Ukrainian Catholic University’s
Center for Leadership conducted an exploratory study aimed at testing the models that Crossan and colleagues had used, to explore the concept of leader character within the Ukrainian context. A project such as this is divided into a number of consecutive phases, moving towards its primary goal of identifying how much importance Ukrainian leaders attribute to the eleven character dimensions. Based on preliminary findings in Canada, and meaningful conversations between the members of both leadership centres, three predictions (hypotheses) were made:

HYPOTHESIS 3:
There is a correlation between a leader`s virtues and his/her personal well-being

The study included 30 in-depth interviews with leaders from different areas including business, public administration, non-profit and religious sectors. During the interview each respondent ranked 11 virtues of the leadership character using the Q-sort method and described each of the them. Furthermore, the study used a method of externally evaluating the respondent by having two people who did not take part in the interview listen to it and rate their leader character. This method
makes it possible to compare how a respondent self-evaluates with the assessment of other people. Additionally, each respondent filled in the questionnaire which indicates a personal sense of well-being. This makes it possible to understand a correlation between character virtues
and a leader’s personal feeling of well-being.

RESULTS
Our data provides support for hypothesis 1 and 2. Ukrainian leaders scored low on accountability at 0,45 and humility at 0,83 (the range was from -3 to +3). These scores were the lowest among all virtues (for example courage was scored at 2,21 and drive ranged at 2,62). Ukranian leaders were shown to places the most value on aspects of character such as courage (2.21), drive (2.62) and transcendence (2.41). 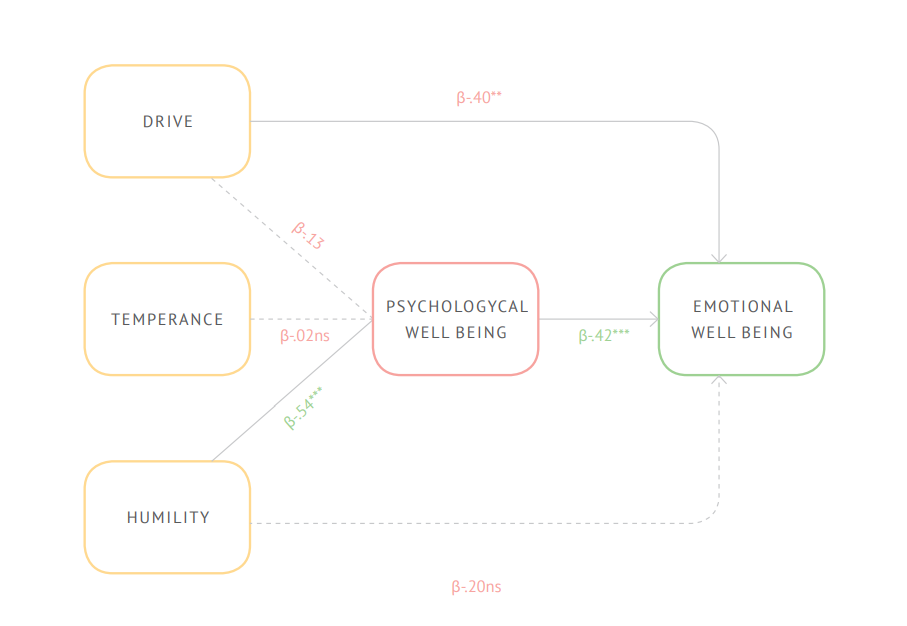 DISCUSSION
Our findings are quite straightforward: an excess of drive in a leader is likely to result in reduced emotional well-being, and increase emotional exhaustion (i.e., a component of the «burnout syndrome»). Therefore, it is recommended that Ukrainian leaders develop the virtue of temperance in order to balance their drive and to protect their psychological well being. Such balance is also an effective way to avoid emotional exhaustion. In Crossan et al.’s model, the strength of temperance includes the habitual practice of virtues such as patience and prudence, as a way to increase a leader’s self-control. Thus, by practicing these virtues leaders can keep calm and composed in turbulent and uncertain situations. Another way in which temperance can be cultivated effectively is through self-reflection, mindfulness, or other meditation practices.

LIMITATIONS AND FUTURE STUDIES
It is important to note that due to the small sample size, there might not be enough statistical scope to detect all nuances and relationships in the correlations. Future studies should attempt to replicate these findings using larger samples. To this end, the Center for Leadership is planning to expand this study; 60 military leaders and 20 small business owners will be the subjects of this expanded research.