Sophia Opatska, Dean of Lviv Business School of UCU (LvBS), was included on the list of
Ukraine’s 100 Most Successful Women. It is the first project about Ukrainian women who have succeeded in business, politics, the community sector, and other areas of life implemented by the publication Novoe Vremya (New Time).

According to the authors of the project, the list includes women who have achieved the most
considerable accomplishments in their careers in eight areas – politics, business, civil service, the corporate sector, the community sector, culture and media business, show business, and sports.

“Sophia Opatska studied in Lviv and then proceeded with her studies in the USA, Poland, and China. Her area of specialty includes personnel management and building learning organizations. In 2008, Sophia Opatska joined the team of Lviv Business School of UCU. Under her leadership, LvBS became one of Ukraine’s most successful business schools,” reads the article. 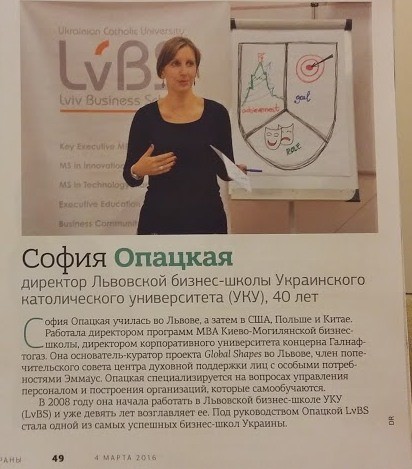 “The greatest value of both Lviv Business School and the Ukrainian Catholic University is their community that is grounded in specific value orientations. These two institutions always have a clear and transparent stance on numerous socially significant matters and offer an environment where people can grow not only professionally but also personally and spiritually,” emphasizes Sophia Opatska.