Editor’s Note: Through student programs, projects and university partnerships, the William Davidson Institute at the University of Michigan (WDI) has worked in Ukraine for more than two decades. This year, the Institute planned to send MBA students to Lviv Business School of Ukrainian Catholic University (LvBS) to assess and make recommendations to improve their consulting process for small and medium-sized businesses. The project, the second in as many years with LvBS, was part of an expansion of the Michigan Academy for Developing Entrepreneurs (MADE). 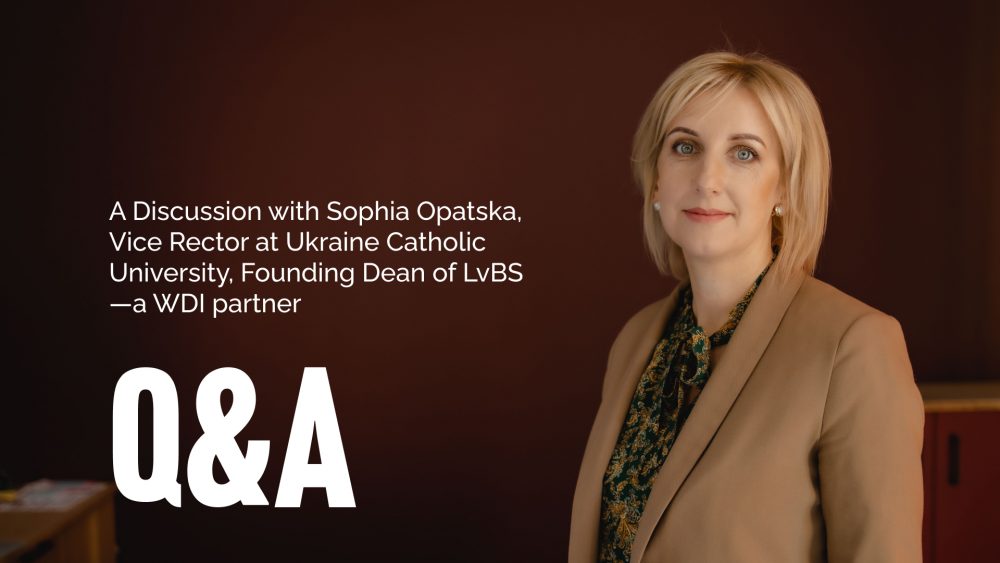 But with Russia’s military advance in February, WDI and U-M decided not to send the team of four students to Lviv, which is located in western Ukraine. WDI President Paul Clyde has been in contact with Sophia Opatska, Vice Rector at Ukraine Catholic University. Opatska offered to give an interview to help spread the word about what is happening there and its greater context. Her responses were sent on March 5—the tenth day of the invasion.

Paul Clyde: Your university has been very active in a variety of areas in response to Russian aggression. How are you able to do that and what is the overall morale in your community?

Sophia Opatska: First of all, we should mention that our University is in the west of the country. Though we do not feel safe because the air is open and we think when Putin gets really angry, we will be the target. If not number 1, probably number 2. Of course, compared to east and south of Ukraine we are in a much better situation, but everybody tries to keep himself or herself busy and help. It not only creates some value for others, but also helps mentally to people. If you are just watching only news, it is really scary, creates a lot of anxiety and you are very unproductive in that way.

We also have a number of initiatives on the campus to help and keep (up) the morale. For example, we have very clear rules for people who are living with us as refugees. They have to get engaged in volunteering and social work and have meetings with our community. We are in communication with our students who left the country. And of course, prayer helps. We have a number of prayers that happen in our Church, which are also online and people can join.  Psychology faculty created psychologically advisory, anyone can approach. Our law students are getting all the evidence, which they can provide to the International Court. Our historians are collecting a lot of stories to create (an) oral history of the war. Maybe right now it looks a little bit weird and strange, but it will be something crucial for the nation in a year, five or ten. In my class, students are writing appeals to international companies to stop work in and with Russia. Indeed, we know that our small contribution helps. (It is) one thing when the Ukrainian Office is putting pressure on the headquarters, but another thing when they start to be bombarded by letters from young people that you have to stop doing business with Russia and in Russia because you are financing the war.

We also communicate with various international communities and ask them to stop the rhetoric of the “Ukrainian crisis.” This is wrong rhetoric. We don’t have crises, we have a war. It is the tenth day of the war when thousands of civilians have been killed, where 7.5 million children are in danger and wording has to be correct.

We also communicate with various international communities and ask them to stop the rhetoric of the ‘Ukrainian crisis.’ This is wrong rhetoric. We don’t have crises, we have a war.

Clyde: You have been providing education to the youth of Ukraine for over twenty years. Can you describe how student views are different now than twenty years ago and how that is affecting the Ukrainian response?

Opatska: Over the last twenty years, we had two revolutions and a war: The Orange revolution in 2004, we had a Revolution of dignity 2013-2014 and it was a long-standing protest for three months during winter, which then succeeded and which made Russians and Putin so angry that they invaded part of Ukraine. Which means that war has been going on for eight years. So in some sense we already have experience of fighting.

Of course, young people who are now students of the University, in 2014 were between nine and 15 years old. So, this is a new experience for them. I would say that those who are older were able to get into work very quickly, we already had experiences with volunteering activities and maybe that is why all initiatives started so quickly. But for students, it is a new experience and I think they are going through a very huge learning process in that. But when you combine their initiatives and new ideas with the experience of those people who were in previous revolutions, who were in the war in the east of Ukraine, it helps a lot on both sides.

Clyde: Over the past thirty years, culminating in the current war, it has become clear that Ukraine is a mature independent country. How much do you think that fact versus some of the other stated reasons (e.g. NATO enrollment) is causing the Russian actions?

Opatska: Great question. I think that was a lot of manipulation that this is about NATO, that this is about us joining the EU. Putin is really furious that in 2014 we stood for democratic values, for human dignity, and for European values and he lost in it. And I think his plan was to have Russian tanks in a couple of hours in Maidan (the city center of Kyiv), and that is why he is targeting Kyiv so badly as a symbol of freedom and democracy, and obviously we went through the long journey of self-identification as a nation. The issue of language was very long used to divide Ukraine, but if you look on the people who are fighting the most at the moment – Kharkiv, Kherson, Zaporizhia, Sumy, Chernigiv – in many ways those regions are Russian-speaking regions and they are not ready to give (up) any piece of land. Probably the plan of Putin was to come and be greeted with flowers in those regions to rely on people who are against Ukraine, and we don’t see that. His global plan is to show the whole world that democracy is not working. The rhetoric of Ukraine as a failed, corrupted state was very actively supported in various media and it was also one of the plans of Putin and (his) servants. Unfortunately, it was also very well accepted in the west, and I think we did a huge journey as I mentioned, but I think the reflection should be done, not only by us, but reflection should be done in the west. We get some signals by admiring (the) courage of the Ukrainian people, and how great our President shows leadership, character. But I think the reflection should be done much deeper: Who we are and what is our effort to save the whole of humanity.

Clyde: What is the main thing you want the world to know about how you, your university, and your country are reacting to the war with Russia?

Opatska: So, there are two levels, I am always saying we have short-term planning and long-term planning. We don’t think in weeks, we think in hours, and days and we think in months and years that are very important for us that give us hope.

Of course, there is so much help short-term and we really appreciate that help from many countries: help to our army, help to refugees, welcoming people who right now need a home, food, and some comfort. We are very grateful for bigger and smaller efforts. At the same time, we as an educational institution need to think about what will be our role in the future.

We truly believe that the victory will come: We do not know when and what will be the price. In case we fail, the whole world will fail. No matter if you are in Portugal, France, the UK, or North America, the ocean does not help much when nuclear power is being used. And the whole system of democracy can fail to be totalitarian, therefore Ukraine is on the frontline of saving it.

So our role as University will be very significant when we will be rebuilding the country and we really need to have a Marshall Plan for Ukraine and our human capital. Though many people leave Ukraine now, we need the best people to come back.

Paul Clyde is president of the William Davidson Institute at the University of Michigan.